However, there is also the possibility that it could decay to new particles that have not been observed until now, so-called long-lived scalar particles (scalar means they are spinless just like the Higgs boson). Some theories beyond the Standard Model (e.g. http://arxiv.org/abs/1312.4992) predict that these particles would be unique in that only the Higgs boson would decay to them, meaning it would have been impossible to study them until now – these are one example of what we call ‘exotic particles‘. 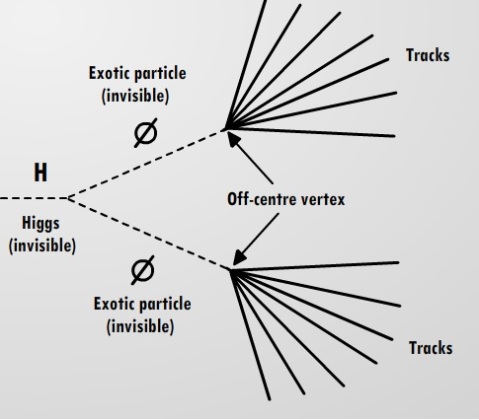 The diagram above shows a Higgs boson decaying into two exotic particles, which then themselves decay into many more particles – this is how an off-centre vertex could be produced. In fact, looking for off-centre vertices was proposed way back in 2006 as a way of detecting the Higgs boson, before it had been discovered (http://arxiv.org/abs/hep-ph/0605193)!

Since this process is not predicted by the Standard Model, if we see these in our detector then we will finally be able to realise the dream of obtaining direct evidence for a new theory of nature – opening our eyes to an entirely new realm of physics.

If these exotic decays are real, then they have already happened at the LHC and are sitting in the data we have right now, just waiting to be found by a keen pair of eyes. By helping with this project, you can take us one step closer to a deeper understanding of reality – to answering some of the greatest unsolved mysteries in the universe.

(Next time: ATLAS: How do particle detectors work?)

The Higgs boson Part 2: Discovery of the Higgs

On July 4th 2012, the ATLAS and CMS collaborations at the Large Hadron Collider (LHC) at CERN, Geneva, independently announced the discovery of a new particle with a mass over 130 times greater than a proton. This was in the range that had been predicted for the elusive Higgs boson, and it had been verified to extremely high certainty.

Experimental detection of the Higgs boson

But what do we mean by ‘high certainty’? In Particle Physics everyone agrees on how sure you need to be to declare something as a discovery, and it’s quite stringent. Firstly, we assume that there is no new particle and calculate the probability that the signal we measure is consistent with there not being a particle there. If that probability is less than 0.32 than we say we are 1 sigma certain, 0.046 = 2 sigma (this is usually good enough for most science), 0.0027 = 3 sigma… We could stop at 3 sigma, as 0.27% chance of being wrong seems awfully small, but there have been a number of possible particle discoveries at 3 sigma level that later turned out just to be statistical anomalies. So just to be absolutely sure, the usual threshold to claim a discovery is 5 sigma (0.0000003 chance of observed signal being consistent with no new particle hypothesis). 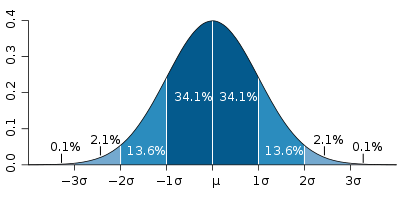 Right, so we’re now pretty sure there is a new particle (that is a boson). But is it the Higgs boson?  Luckily, by March 2013, evidence surfaced that the new particle is what we call ‘spinless’ (meaning it looks the same from every direction) and that its interactions match the theoretical predictions of the famed Higgs boson. Further testing will take place from 2015 onwards, as the LHC ramps up towards its maximum energy of 14 TeV for the first time (double the energy it was running at in 2011 – more on particle energies in a future blog post).