Here are a few (of many!) nice examples where you’ve collectively outperformed the reconstruction algorithms to find some Off-Centre Vertices in simulation. 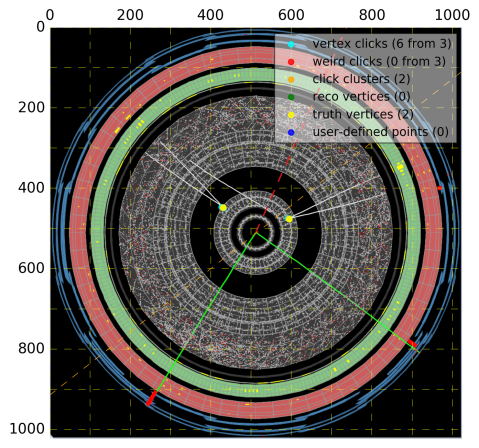 Here 3 people have together identified both OCVs – the orange dots are hidden underneath the yellow ones since they’re spot on!

Saving the best for last: a more complicated image, with a few ‘stray’ tracks complicating things. However, when combined the 28 clicks from 7 people form clusters bang on the simulated decay points! As an aside: the ‘weird’ clicks are marking the little coloured dots you often see in slice views – these are completely expected, and show the positions of all the proton-proton collisions that happened at the same time but at different positions along the beam pipe (which runs horizontally across the centre of the image).

It’s great to see you all doing such a good job at finding these OCVs, more analysis to follow!